I've had Robert Frost's Acquainted with the Night poem stuck in my head intermittently for awhile now. There is something about the rhythm and feel of that poem, even though I have trouble remembering the words.

Tonight the poem really seemed to fit. I was taking recycling out to the end of our driveway and glancing at the stars peaking out from over the tree tops. Crickets sang thier summer song while a cool breeze carried the soft scents of freshness. Looking around and feeling everything the line about walking past the furthest city light hit me.

Kind of ironic in a way, from the end of our street the city skyline is visible.

Butterflies in my Garden

We have had more butterflies than normal this year, it was even a news story awhile back. With the baby I haven't been able to get outside with my camera as much as I would have. Yesterday my husband had some daddy daughter time and while I was in the kitchen I noticed a butterfly on my coneflowers. So I grabbed the camera and went outside. 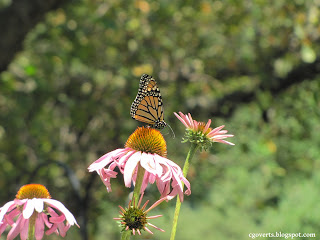 When I first went outside I startled the butterfly. It was fun watching it flutter around me in a great circle before coming to land on the flowers again. The first shot I took had my house siding in the background. I knelt down and got a shot with trees in the background instead.

Later that day when I was carrying my daughter around I saw another butterfly through the window. I handed baby over and grabbed the camera. I again startled the butterfly and watched it fly around. This one was a bit trickier as it kept moving so it took awhile to line up the broad part of the wings. The first nice wing shot ended up a silhouette. 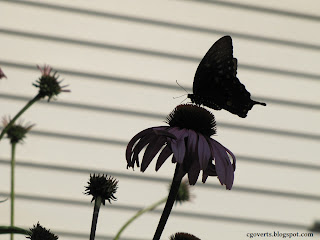 Well, there is some detail on the butterfly. But the lines from the siding make this look more snap shot. I did get a better shot after this. 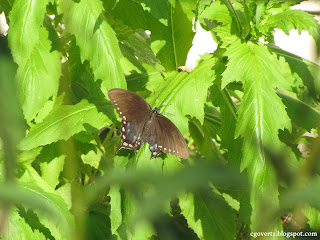 It had landed in a different part of the garden so I took the shot through a gap in the coneflower stalks. And yes I do need to weed my garden. This guy has something wrong with his wing, but he flew just as well as butterfly 1.

My husband, daughter, and I sat outside together for awhile. The temperature went down after dinner and with the breeze it was pleasant in the shade. We sat in our front yard and enjoyed watching the breeze in the trees. Daughter loves the outdoors. Those little baby eyes watch the green leaves against the blue sky. She also watches people and cars going down our street. I think she was even watching a white moth flit across the garden from the kitchen earlier.

While the three of us were outside I saw a yellow butterfly. I still had the camera, but before I could get a shot it flew across the street and didn't come back. I had taken a picture of a little moth earlier though which turned out alright. One of our front yard chairs is in the background. I think it adds something to the picture. 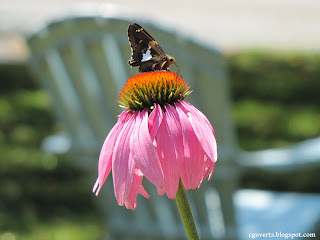 And that's a wrap for my Saturday photography "trip". It was enjoyable to get out with the camera again, even if it takes more time to then share the pictures. I've gotten rather used to my cell phone with the share button. And I'm glad to be getting this post together before daughter wakes. Yes, insert joke here about baby alarm clock. At least she doesn't cry when she wakes, she just coos and babbles really cute.
Posted by Claire Goverts at 8:03 AM 3 comments:

Email ThisBlogThis!Share to TwitterShare to FacebookShare to Pinterest
Labels: Nature-Photo-Blogging

So awhile back I'd Tweeted about blogging about apps I've tried out. I was playing with this app tonight and thought it would be fun to blog about. I got the free version for my Android.

Pretty much this app has a random element to it. Each time you touch the screen there is a different color, or line thickness. You can tap a button to randomly select another brush.

This is something I play with when I want to randomly Doodle. And I also let the baby make a drawing on occasion. I don't want her to have too much screen time.

They also make an app called Paint Joy which has a color selector and some different brushes. I use that one when I want a bit more planning with a picture. 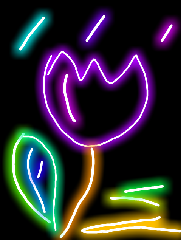 Email ThisBlogThis!Share to TwitterShare to FacebookShare to Pinterest
Labels: apptastic

I'm having trouble falling back asleep after having been up with the baby. As I look at the patterns of shadows cast across the blinds while trying to fall back to sleep I've been thinking of random things.

One idea flowed into another in that unique way that happens in the wee overnight hours. A burnt card leads into a fond memory of worry stones.

I grew up in a small town, our little block surrounded by fields and woods. Down a path a ways there used to be a fairly large pile of shale rocks. I was young at the time so it may have seemed larger. It had enough to it for us to climb on.

My family used to take walks to shale mount. My brother and I would climb up on it, reaching the peak fairly easily. We would sit on the dark warm rock and overlook the surrounding field, and the woods a little farther away.

And some times we would do worry stones. See the thing about shale is that it is brittle. It cracks apart easily and has sharp edges. We would use one piece of shale to write on another creating a worry stone. We would put down a few words about something that was bothering us then toss the worry stone over the side of shale mount. It would then break symbolic of letting go of the problem / worry.

Sometimes in life you do your best but things are still rough. You Do what you can, ask for help as possible, and take a deep breath while letting go of what can't be.  The stones were a nice tactile and focal point for this.

3 am wisdom and bits of a childhood memory. I'm not 100 % sure where shale mount actually was. The clearest part is the worry stones.

Posted by Claire Goverts at 3:00 AM 2 comments: 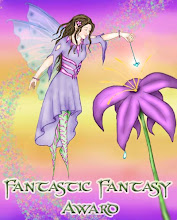